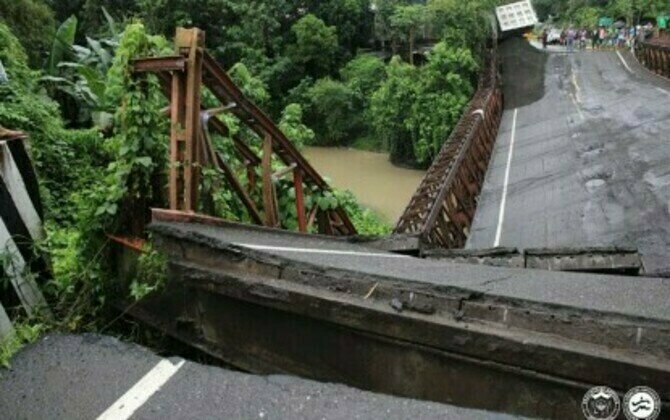 SAN JOSE DE BUENAVISTA, Antique -A 10-wheeler truck transporting tons of quarry materials is being linked to the collapse of a steel bridge at the boundary of Sibalom and Hamtic towns in Antique province on Monday.

The truck driven by Eljohn Orbigoso was on its way to Pavia town in Iloilo province from Sibalom when it passed by the Buhang-Egana bridge around 3 a.m. Monday, said Sibalom Municipal Disaster Risk Reduction and Management Officer (MDRRMO) Joel Odango in an interview.

The bridge load limit is said to be only up to 10 tons, but the truck was reportedly carrying around 30 tons of quarry materials.

"The truckload was over tonnage," Odango said.

Orbigoso was hired by a certain Aladdin Pacete to transport the quarry materials.

The truck also rammed a grocery store owned by Carlos Abarrientos when the driver attempted to prevent the vehicle from falling off the bridge.

Hamtic Municipal Police Station chief investigator Master Sgt. Oliver Villanueva said the DPWH is still determining if the bridge collapsed due to the overloaded truck or because of its deteriorated state.

"We are still waiting for the DPWH investigation, which we hope would soon release its report, about the real cause of the collapse of the bridge so to know the liability of the driver or the person that had hired the truck," he said.

Following the collapse of the bridge, commuters are advised to take the national road from Sibalom to this capital town towards Hamtic when going to Iloilo province. (PNA)