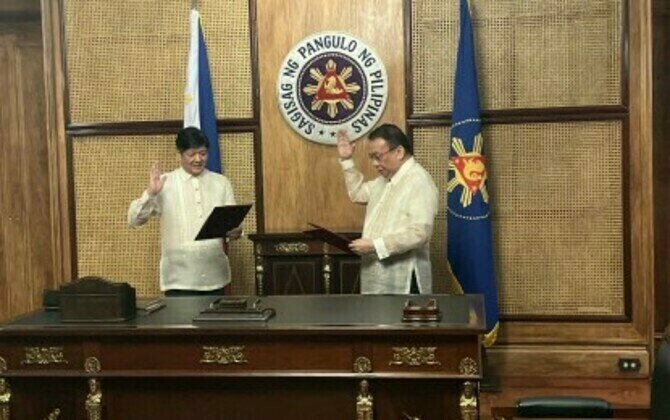 Marcos administered Bersamin's oath of office before the holding of the 9th Cabinet meeting at Malacanan Palace in Manila, Press Secretary Trixie Cruz-Angeles said in a press statement.

As an Executive Secretary, Bersamin will be referred to as the "Little President" who is mandated to "directly assist the President in the management of affairs of the government as well as to direct the operations of the Executive Office," according to the Official Gazette.

The Office of the Executive Secretary (OES) is also deemed "unique," in the sense that it has both line and staff functions.

The OES also performs other duties upon the discretion of the President or as stated by law.

Prior to his new stint, Bersamin served as chairperson of the Government Service Insurance System (GSIS) under the leadership of Marcos' predecessor, former president Rodrigo Duterte.

Bersamin was named as the country's top magistrate in November 2018 and retired from the judiciary in October 2019.

A native of Abra, Bersamin finished his law degree at the University of the East in 1973 and placed ninth in the bar examinations in the same year.

He served as presiding judge of the Quezon City Regional Trial Court Branch 96 in 1986.

In 2003, Bersamin was appointed associated justice at the Court of Appeals and was promoted to the Supreme Court in 2009.

He bagged the Judicial Excellence Award for Best Decision both in Civil Law and Criminal Law. (PNA)