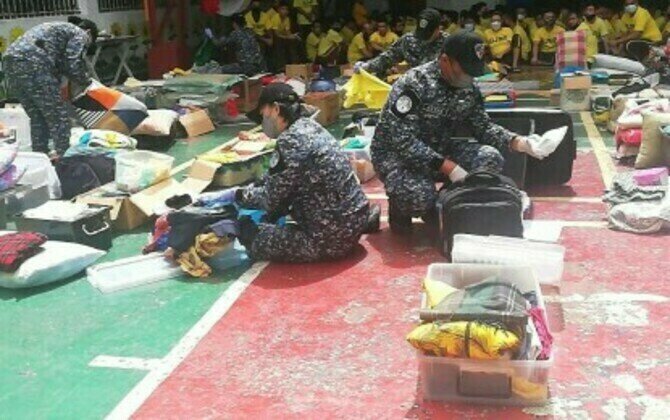 BAGUIO CITY - Authorities did not find illegal drugs during greyhound and search operations among inmates at the Baguio City Jail Male Dormitory (BCJMD) on Tuesday.

"This is the second time that we have a joint greyhound and we did not find any illegal drugs," he told reporters during an exit conference.

Each of the occupants of the detention cells was asked to remove their shirts and bring their personal belongings to the quadrangle with them. The PDLs sat together at the corner of the quadrangle while authorities conduct the search in their presence.

Drug sniffing canines were made to check each of the boxes while anti-narcotics operatives search individual boxes for other contrabands like metals, dangerous items, and other prohibited items prohibited inside the jail.

Other PNP and PDEA personnel also simultaneously searched the 27 detention cells for drugs and other contraband.

BCJMD Jail Warden, Supt. Mary Ann Ollaging-Tresmanio, said the activity is the second of the three greyhound operations required before they can be issued a new certificate.

"All three greyhounds must yield a negative result," she said.

The jail facility was first issued its certificate in 2019, which it hopes to renew after a moratorium was implemented due to the coronavirus lockdowns.

She said the BJMPaims to make its facilities drug-free as a contribution to the government's initiative to make state-run facilities free from illegal drugs.

Tresmanio said 63 percent of the 434 PDLs at the BCJMD are facing drug charges.

As a regular program to ensure that the jail maintains a drug-free status, Tresmanio said an in-house greyhound search is done monthly by their personnel.

This is aside from the regular random drug testing of PDLs, regardless of their offenses.

During the greyhound operations, all 70 personnel of the BCJMD and 10 percent of the PDLs were subjected to drug testing.

"We hope the results will be negative like before," she said. (PNA)